You are here: Home1 / Location

All our training sessions take place in and around Coiba National Park. Depending on weather and sea conditions, as well as required depth, we take the boat out to find a suitable spot for the days’ adventure.

Coiba National Park encompasses over 270,125 ha of which 216,500 ha are marine and 53,625 ha are insular. It is located off the Pacific coast of the Panamanian province of Veraguas and is part of the Tropical Eastern Pacific Marine Corridor, which also includes Cocos Island and Galapagos. After turning Coiba into a National Park in 1991, the Panamanian government has made a pretty successful attempt in protecting the 760 different species of fish that can now be found there. It was declared a Unesco World Heritage Site in 2004. Coiba Island is the largest island in Central America, with an area of 503 square kilometres, and is only one of 38 smaller islands that can be found in the park.

All of these efforts have contributed in protecting the area and it is not unusual to see schools of barracuda, bigeye jacks, devil rays and rainbow runners, or sometimes curious wahoos, turtles or even the occasional shark come to visit us during our training session. During reef exploration there are numerous fish species, including surgeons, angels, puffers and parrots, that will fill your heart with joy. During the boat rides you may get to see dolphins and humpback whales, whom you may even hear singing while doing a hang. If luck is really on your side, whale shark and oceanic manta encounters are also a possibility. Overhead, we’re often being observed by pelicans, frigates and brown boobies, just 3 of the over 133 registered bird species found in the national park, including the scarlet macaw. 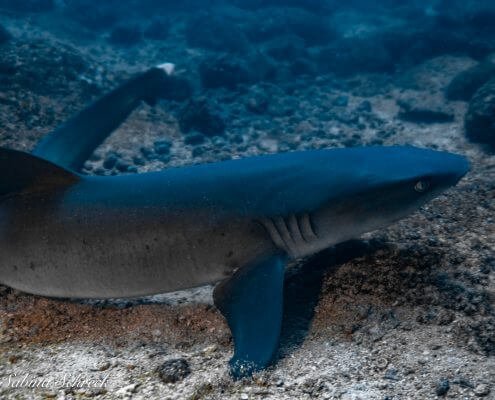 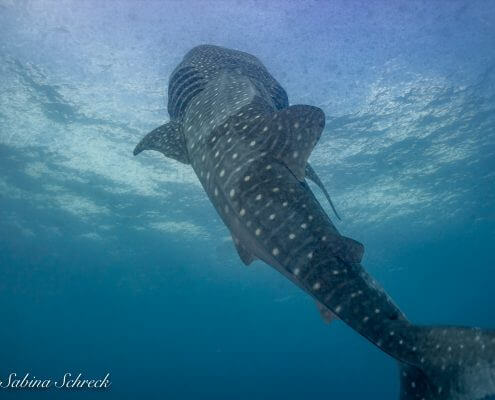 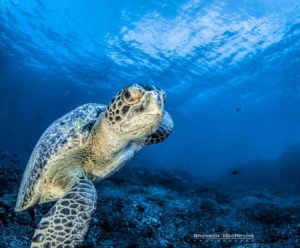 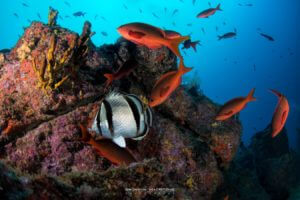 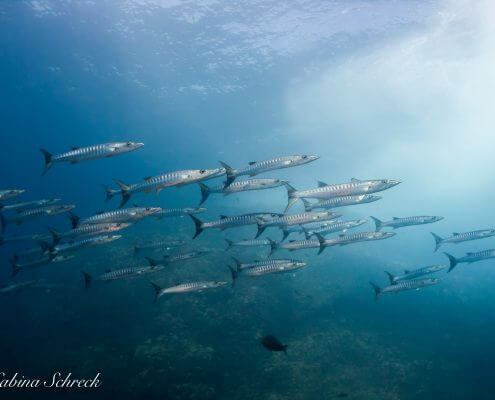 Santa Catalina is a small fishing village located two hours from Santiago and five hours from Panama City. It is the shortest boat ride from the mainland to Coiba Island and the National Marine Park. There are two small grocery stores, a fruit and vegetable store and many hotels and restaurants that cater to all budgets. The nearest main town is Soná, located just over an hour away by bus. It is still relatively small, but there you will find larger supermarkets and facilities including a post office and a bank (we do have an ATM). In Santa Catalina, although there is a pharmacy, there is no doctor, so make sure that if you require a medical clearance for freediving, you get this done before your arrival here.

Santa Catalina is now also a tourist destination, and much of the small community’s income and industry is derived through tourism. In the high season (from December to April), hostels fill up, whilst in the low season the town feels like a sleepy village where you can lose yourself in the slow pace of life.

Activities include of course freediving and scuba diving, but also surfing (location of the ISA Reef World Surfing Games, 2013), yoga, kayaking, hiking, and horseback riding. There are two beautiful beaches where you can relax and if you dare, you can attempt the 1.5 kilometer swim out to Santa Catalina Island.

How To Get Here

If you are coming from Boquete or Bocas del Toro, you can get a bus to Santiago, then take a bus to Soná, and then another one to Santa Catalina.

Check out Transportes Odalis or Caribe Shuttle to get to Catalina from the city or from Boquete or Bocas.

There are many rental agencies in Panama and the roads are safe to drive. No 4×4 is necessary unless you are planing something specific. From Panama City, take the Panamerican Highway all the way to Santiago de Veraguas and then make your way onto Route 4 towards Soná. Just before reaching Soná, you’ll find a turn-off (Delta petrol station) to the left that leads to Santa Catalina. The whole trip usually takes about 6-7 hours. Stick to speed limits, there’s a lot of police on the road.

If you are in a hurry or prefer the comfort of a private car without driving yourself, you can get a taxi to come fetch you at the airport or your hotel and it will take you straight to Santa Catalina. Just let us know and we will arrange this for you. Approximate cost is $250 one way.

Maps were disabled by the visitor on this site. Click to open the map in a new window.

(subject to change without prior notification)